I did it… I retired my private pants. It would have been a sad day, except I now have 2 pairs of the GREATEST PANTS ON EARTH. My boyfriend (that’s right, I said it) refers to them as my “Aladdin pants,” due to their majestic flowy-ness (He was actually mocking me, but I’m sure it was done with love). I had plans with him the other day, and he texted ahead of time asking if we could just stay in. I was like, “Fuck yeah.  I was planning on wearing my fancy sweatpants anyway.” Since my new fancy sweatpants have huge slits up the outside of each leg, I couldn’t actually wear them to his place (it’s too cold for that nonsensical bullshit). That means I showed up in leggings and literally took my pants off in his entryway to put on my new, sexy sweatpants. Yes, sweatpants can totally be sexy (he would disagree, but we’re not asking him). He did agree on their functionality, stating that they are essentially the pants version of “sticking a leg out from under the blanket when sleeping.”

I bought a second pair to keep at his place, so I can stop stripping in his entryway. I’m sure he’s disappointed. 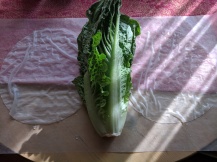 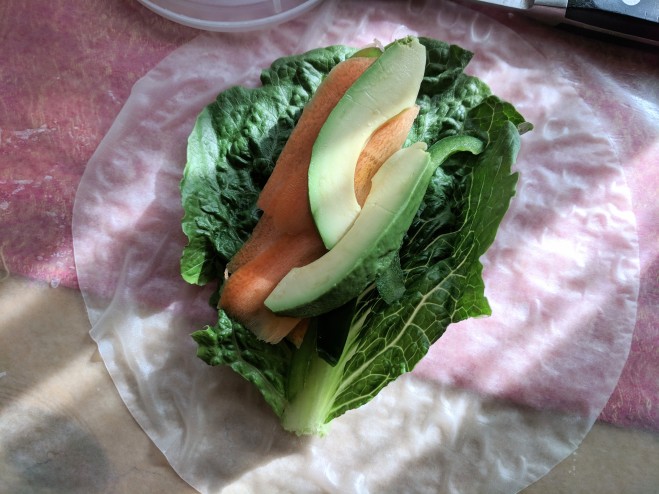 I also wore these to the AcroYoga retreat last weekend. I brought an entire bag of clothes – probably 3 full outfits. But I only wore these fucking amazing pants, and the outfit I drove in (both there and back). I mean, honestly, why put on something that will make me less happy? 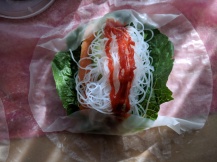 Speaking of acro, my lovely acro friend, Jamie, taught me how to make these rolls. The recipe called for cilantro, but she is a kind soul that would never even think of having such a monstrous thing near me. They are oddly filling, so make sure you’re hungry. Also, we ate them with mushroom and tofu miso soup, which was a nice appetizer with it. They’re crazy simple, and really refreshing in the middle of winter. They’d also be nice in the summer when you don’t want to turn the stove or oven on.

Big leaves of lettuce (I used Romaine, but they were a little too huge)

Avocado, sliced (critical to add because otherwise everything just tastes like crunchy water – you need fat!!)

Bean sprouts (I forgot, which made me sad)

Peanut butter and Hoisin (equal parts, mixed together, for the sauce)

YOU WILL NEED WAX PAPER FOR THIS RECIPE

For the rice paper: Use a large saute pan filled with warm water (NOT HOT) to soak the rice paper. You’ll do this one at a time, and they only need to be soaked for maybe one full minute at most (I kept feeling mine, and pulled it out once it was soft-ish).* Once the rice paper is soft and foldable, pull it out of the water and spread it out on wax paper. You can lay out a few before starting to fill them, but don’t let them sit too long (they get sticky).

For the filling: Start by placing one large lettuce leaf in the center of each rice paper. From there, layer avocado and veggies of choice. Top with a small handful of rice noodles and a heavy squirt of Siracha.

To roll: Fold the top and bottom of the rice paper over the filling. Then choose a side to start at – pull that side of the rice paper all the way across the filling and tuck it under the lettuce leaf. Continue to roll in that direction. The rice paper will stick to itself. It takes a few tries to get it right, but the janky ones are delicious, too, so don’t stress about it.

For the sauce: Mix equal parts peanut butter and hoisin sauce together. I ended up adding a tiny bit of warm water as well, because the sauce was super thick. The sauce adds a much needed fat as well, so definitely don’t skip it.

Serve with the sauce on the side. Race your friend to see how many each of you can eat (it’ll be shockingly few). Make more sauce and eat it on everything.

*There is definitely an inappropriate joke to be made here.

One thought on “Vietnamese Summer Rolls and New Pants!”