Have you ever loved a pair of sweatpants so much that you continue wearing them far beyond their expiration date? You know what I’m talking about… they’re the pants that are so well loved it’s hard for you to see how bad they’ve gotten. I mean, logically you know how bad it is. You’re not blind – you can see the small snags turn into large rips. You’re aware of how ridiculous it looks with the drawstring dangling down to your knee from a hole on the right side – making it completely fucking useless. But it’s cool, because you never use the drawstring anyway. These pants know your body so well, they don’t need to be held up with a fucking drawstring… they’ve become one with your body. 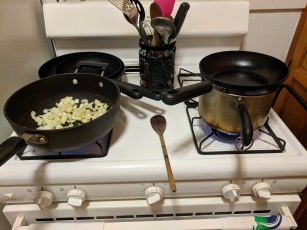 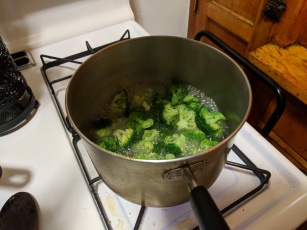 This carrot is out of control.

I have a pair of these pants. They feel as if they’ve been custom made from clouds just for me… but they look like they were thrown together by a small blind child who thought he might take up sewing one day. My friend Jeni would call these my “private pants.” She encourages me to “wear them with pride… just do it in private.” Her husband has a pair of them that mortify her. He says that I’m allowed to wear them to the grocery store, but only if I shop at Walmart.

So last weekend was the Super Bowl here in Minneapolis. The city was psyched to host such an event, and you could feel the energy in the air. There were events going on downtown for 10 days leading up to it. The excitement is contagious, even if you are like me and think sports are giant waste of fucking time. So I got into the spirit the only way I know how… I rented my apartment to a Patriots fan on Airbnb and became homeless for 3 days. With my cat.

So you remember the Wii controller guy? Yeah, we’re still dating (I know). He’s tall and cute and redheaded… and has deep fear of commitment (just the way I like ’em). I stayed with him over Super Bowl weekend with my cat, Harriet. It also happened to be his birthday weekend, which means we hung out with one of his good friends (and the only friend I’ve ever met) who is a goddamn delight. She calls him on his commitment shit, which I think is hilarious. She also likes selfies with security guys at Super Bowl events, which just makes my heart happy. We spent our Saturday getting hammered and roaming around downtown Minneapolis in subzero weather, desperately searching for the Kitten Bowl. Obviously.

Anyway, Wii Controller Guy housed me for 5 nights, and we never once tried to kill each other (despite me breaking his sink and his cat’s food bowl). He did, however, have to be blunt with me about my “private pants.” That’s right – I wore them over there because we are totally at that level (you know – the “I’m pretty sure you’re not going to bail at the sight of my homeless looking pants” level). I think he said something along the lines of, “I can’t have you wearing these.” But fuck! Those pants feel like goddamn angel wings.

I mean, the jury is still out on whether or not I’m allowed to call him my boyfriend, and he’s trying to tell me to get rid of my favorite pants?! I don’t know, man. 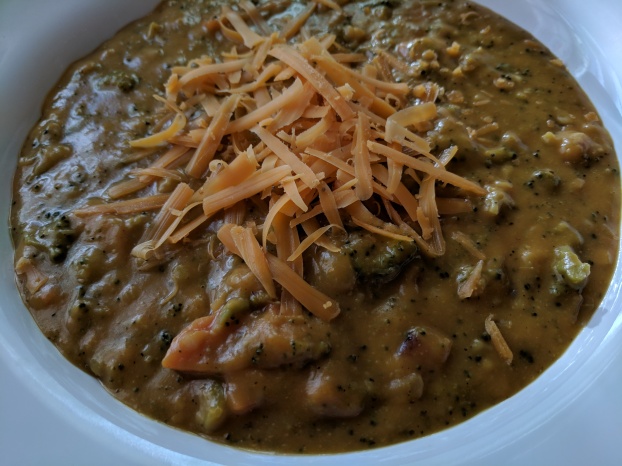 I ordered new ones online last night. But I refuse to toss my old ones until I know for sure the new ones are just as comfy (they won’t be).

This soup is made to be eaten while wearing your private pants (you know you have a pair). Get cozy, because it’s cold as fuck outside.

Salt and pepper to taste

Oven roast squash at 400 degrees for about 40 minutes. It needs to be soft, since it will all be blended and (ideally) needs to be smooth. Check it about halfway through roasting time to move things around a little bit. Sprinkle with salt and pepper. Set aside to cool a bit. Once cooled, puree in a blender with 2 cups of veggie broth until smooth.

Steam the broccoli and separate into 2 halves. Set aside. In a large pot, saute onions in a little olive oil – add salt and pepper. Cook until slightly browned, then sprinkle with the flour, 1 tablespoon at a time. Mix each tablespoon thoroughly before adding the next. It will form a thick paste. Once flour is fully incorporated, cook a few minutes longer to toast it a little bit, stirring frequently. Add in the squash puree, 1 cup of broth, and the milk. Stir well, making sure there aren’t any clumps from the flour.

Throw on your favorite pair of pants (because it’s too cold to be pants-less right now), and don’t let anyone tell you they aren’t the best pants in the world.