The snow has been out of fucking control here in Minneapolis. We didn’t get much snow at all this winter until about 2 weeks ago, at which point it dumped all the snow we should have gotten over the course of 3 months in 2 weeks. On top of that we also had the coldest day on record since the fucking 1800’s* or some shit. I HAD ICE ON THE INSIDE OF MY APARTMENT WINDOWS.

THIS IS NOT OKAY.

Today the city issued yet another snow emergency, which just means the street parking situation will be all fucked up. My tiny ass Honda Fit is missing her cushy life with the retired couple that bought her new 10 years ago. She used to live in a garage for fuck’s sake. But she’s a fighter! It only took 3 tries (and a little pep talk) to get her started on the coldest day in recent history (it was a high of -15… that’s NEGATIVE FIFTEEN DEGREES).

The day prior to the icy windows day was a balmy high of -2, so I thought it’d be a great idea to walk to therapy. After all, it was only 4 blocks from the gym, which was already charging me for parking, so why pay a meter too? I layered up with my base layer first, which consisted of leggings, wool socks, a tank top, and a long sleeved t-shirt. Then I had a cheap-ass peacoat, a very warm knit hat that covered my ears, a chunky hand knit infinity scarf (also pulled over the hat), and super warm mittens. Oh, and snow boots of course. I don’t fuck around with footwear in the winter. It’s always North Face now that I’m an adult. In New York, my tiny 23-year-old brain thought discount store fashion boots were acceptable footwear in the snow. I was a goddamn moron. Clearly I haven’t learned much yet, though. Because, if you know anything about winter, you’ll know that my attire for that 4 block walk was absolutely not sufficient. My legs were literally only covered with LEGGINGS. Not even thick yoga leggings, but fashion leggings. I might as well have been out there pants-less. That millimeter of fabric was doing absolutely nothing to cut the wind. At first I thought I’d be fine, because it’s only 4 blocks. I can handle anything for 4 blocks. Halfway through the walk I realized I’d made a huge mistake. My thighs were starting to hurt, and I was getting nervous. By block 3 my thighs started to sting. Waiting for the crosswalk across the street from my therapist’s office they started to feel warm again. That’s when I really started to panic, because I had some elementary school memory flash before me of being told that was a bad sign (which is completely false, but try telling that to my anxiety). I couldn’t cross that street fast enough, and silently cursed every single car that made me wait.

I finally made it to my appointment, and even back to my car afterwards (with a stop at Chipotle to warm up). This week I opted to pay for parking across the street. Plus, it gave my car a chance to warm up in the parking ramp. She deserves it. She didn’t ask for this life.

After therapy last week, I decided to bake yet again. I’ve been baking a lot due to the weather. Plus, it calms me down when I’m anxious or overwhelmed, which has also been an issue lately. I’m also hoping to get a spot in the local farmer’s market to sell baked goods, which means I need to practice different recipes. I’ve been feeding T like crazy, and also bringing things to work. These blondies were not heavily shared, though. I was feeling selfish, and that’s okay. Plus, the recipe only makes an 8 x 8 pan of them, which is so much more manageable than most brownie and blondie recipes.

In a large mixing bowl, whisk together butter and sugar. Add in egg and vanilla. Whisk well. Then with a large spoon, slowly incorporate the flour, baking powder, baking soda, and salt. Finally, fold in the vanilla chips and chopped pecans.

Press into greased baking dish so that it’s one even layer (it will be the consistency of cookie dough). Bake for 25-30 minutes. Scoop a big bite out as soon as it’s cool enough to not burn your face off. Cut the rest into cute little squares and serve on a plate/tray so no one else knows you weren’t able to control yourself before it was fully cooled. Or don’t and own it. You’re allowed to eat blondies at any temperature you choose. 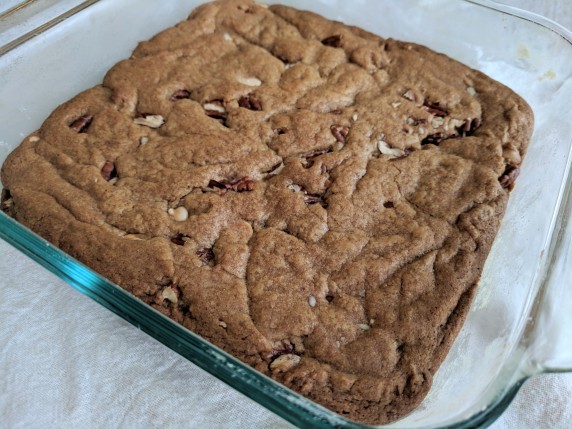 *This “stat” was pulled right out of my ass. I believe it was the coldest day since the 90’s. Same thing though, right?