I went to Hawaii a couple of weeks ago because my BFF is having a baby! It is very exciting, and made for a trip full of midday naps and lots of snacks. I wish I could incorporate midday naps into all of my days, but I just can’t figure out how to make it happen. There are absolutely no adults in my life that allow for this daily rest, which is bullshit really. Sigh. Why can’t we all be more like Europe, with their midday siestas and whatnot? I mean, why the fuck does everyone think they’re cranky all the time? Because we’re not allowing for enough snacks and naps. I’m better than the average person at snacking, but I am tragically behind in napping.

A serious lack of naps are causing me to flip people off in traffic. It’s not my fault. It’s my utter exhaustion.

While in Hawaii, the weather was 89, sunny, and humid every single day. Being from Minnesota, I was all about it. Especially knowing I would come home to fall weather, and inevitably, 6 months of winter. I was soaking in the last few days of summer, knowing it would all end soon. 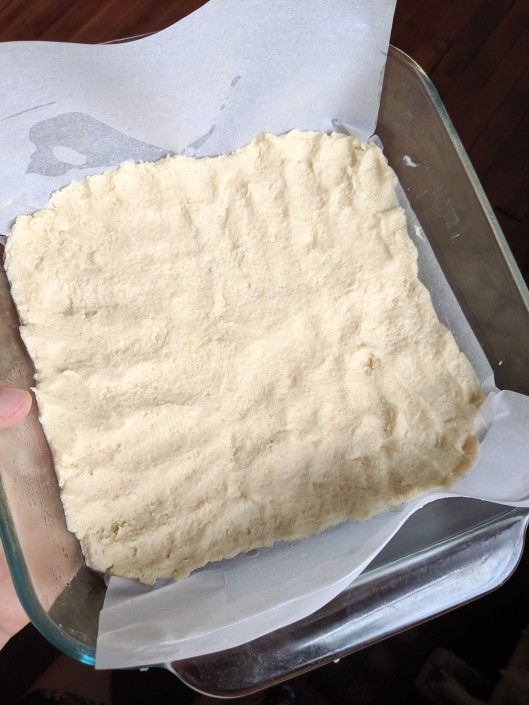 When I got home from Hawaii, it was 85 degrees and tropical level humid.

It was like I didn’t even travel 11 hours away from Hawaii at all. I mean, where was fall? Why did it feel like there was a blanket over everything? It didn’t help that all the swimming and humidity had caused an ear infection in Hawaii, and now I wasn’t even getting away from the moisture. I had to take 3 extra days of antibiotics, and I think it was the fault of the fucking humidity. 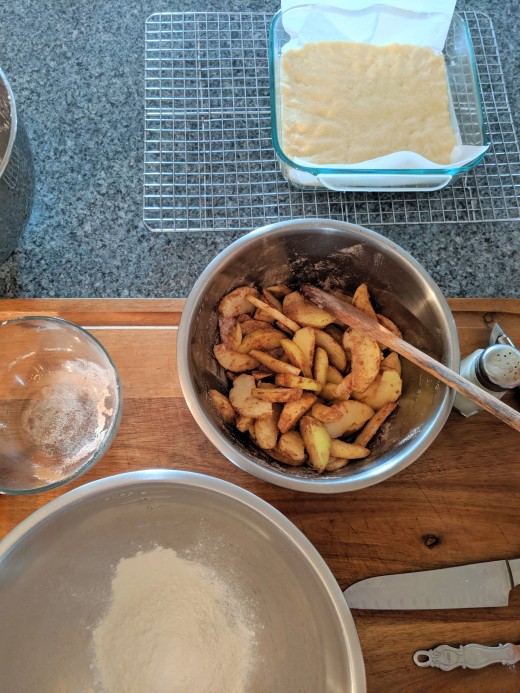 The heat finally broke a week later, so T and I immediately went apple picking. I mostly hate fall, but I love the food. I mean, obviously. It’s fucking delicious. Everything is in fucking season, the farmer’s markets are overflowing, and the shit is dirt cheap. It’s the fucking best. So we picked some apples (which were a steep $24 a bag), and I went to Pinterest for ideas. I landed on these bars, since I have an obsession with shortbread, and a need for the fruit to crust ratio to be more like 1:1 rather than a pie that is nothing but fucking fruit. Mostly, I just want to eat cookies with some apple flavor… I think that’s the real truth. I’m just not that into pie. 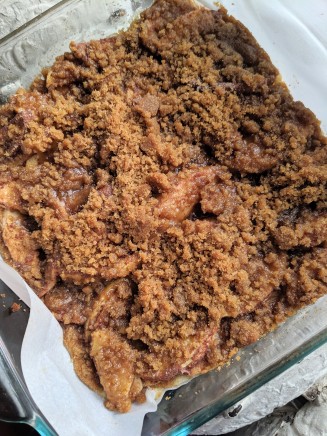 This was relatively easy to make and tastes better than your grandma’s homemade apple pie. Seriously. 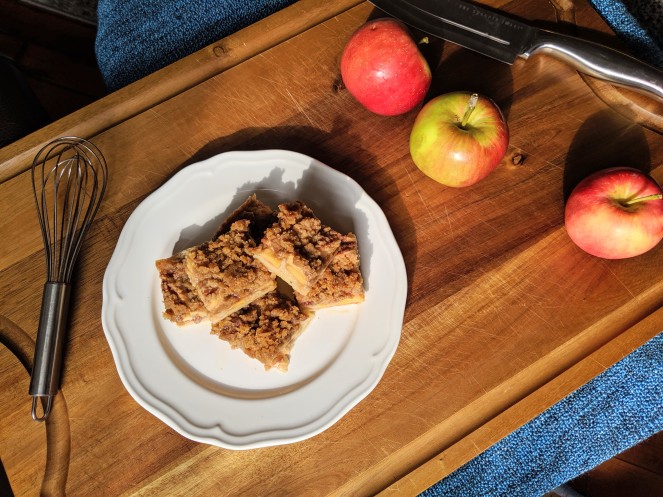 For the shortbread crust:

For the apple filling:

Preheat the oven to 300 degrees. Grease and line an 8 x 8 pan with parchment paper. Make sure to have excess parchment paper pulled up on each side to make it easier to pull the bars out of the pan later.

Beat butter in a mixer for a few minutes, waiting until it turns from yellow to white. Add in the sugar, vanilla, and salt. Mix well, then stir in the flour until just combined. Press into the parchment lined pan until there’s an even layer. Bake for 15 minutes.

For the apple filling:

In a large mixing bowl, combine the apples with the flour, sugar, cinnamon, and allspice until apples are well coated. Set aside.

Mix flour and brown sugar together in a medium mixing bowl. Sprinkle the cubes of butter over the top, and mix in with your hands. The heat from you hands will melt the butter slightly. You’ll want to really use your fingers to break up the chunks of butter until the mixture comes together like a crumbly dough.

Once the crust is done, remove from the oven and increase the temperature to 350 degrees. Sprinkle HALF of the topping over the crust. Then layer the apples (there will be more than one layer). Finally, top with remaining crumble topping and bake for 30 minutes.

This is the hard part – you are then expected to not only let it cool completely, but also set it in the fridge for TWO GODDAMN HOURS before cutting and consuming. It’s supposed to “set,” whatever the fuck that means. At that point, you can easily pull the whole thing out by the parchment paper, and cut them into 16 little squares. I like ’em little, but you do you.

They literally taste better than pie.