As many of you know, I have a bit of a yoga obsession. It’s right up there with ice cream for me. I’ve only been practicing for a little over a year, but feel drawn to yoga unlike anything else. So I’ve decided to take the leap and sign up for a teacher training program. This doesn’t seem like that big of a deal to most people, but this is huge for me. I’ve never loved something enough to really dive in head first like this. I mean, not as a adult. There are things I’ve dabbled in, or thought about doing “someday.” This is the first time I ever thought to myself… what about now? 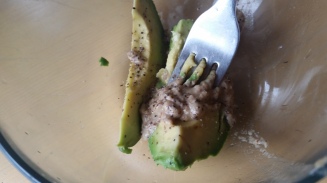 I had been talking myself out of it for months… telling myself that I wasn’t good enough yet, that I needed more practice… that I had to nail that headstand first. I thought I’d take the training next year, once I was ready… once everything was perfect. Fuck perfect. I’ve been waiting my whole life to take chances, to believe in myself enough to jump in. I’ve been waiting for everything to align perfectly, so that I’d then feel ready, and wouldn’t have to worry about failure. Failure isn’t so scary. It just means we wanted something enough to try. What’s wrong with that? 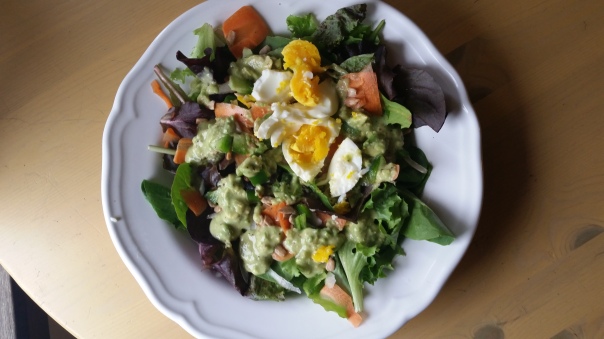 I’m drinking with Hannah this weekend, so there will be stories next week. And more snark. I guess I’m not always feeling snarky. This week I’m feeling inspired.

I would also like to mention that I based 2 people at the same time in Acro Yoga this week. Like a fucking bad-ass. 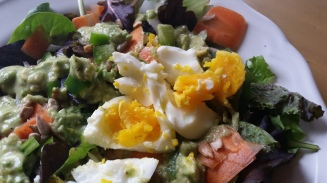 Juice from one lemon wedge

Fill a small sauce pan with water and bring to a boil. Lower in egg with a slotted spoon and let boil for 6 minutes (or, if you’re like me, 9 minutes…. but then the yolk will be hard and sad). A 6 minute egg will be soft-boiled, which is wonderful on salad. The yolk mixes with the dressing and makes everything more delicious. Eggs are the only food that come with their own sauce. USE IT.

While the egg is boiling, throw the greens and veggies into a large bowl. Mix the dressing together by throwing all ingredients into a bowl, and mushing it all together with a fork. Drizzle over the salad, and top with the soft-boiled egg (don’t forget to peel it). If you eat meat, add a little bacon to this.

I have found that this salad does not need cheese. The yolk is rich enough. However, if you feel the need to have cheese, no one is stopping you.

I’m a big fan of pairing this with a donut. But you do you.