T and I have been getting settled into the new place. We’re finding our routines and learning how to live with another person. It’s a lot of compromising and communication, which neither of us are used to after living alone for the last few years (more for him). The cats are getting used to it, too. And by “getting used to it,” of course I actually mean that they are causing the loudest fucking ruckus every goddamn morning at 4am. T didn’t believe me that we should wait until 7am to feed them in the morning. He insists that we feed them right when we wake up at 6am. Well, I don’t know about other cats, but MY fucking asshole cats start screaming for food at least an hour and a half before it’s actually time to feed them. And they are happy to teach other cats all their asshole tricks, too. Bourdain usually starts it. He will zip around the apartment, often taking the time to dart across our sleeping bodies several times before knocking the books off the bookshelf in the living room. Then, when we finally get up to wrangle him, he shoots under a chair or behind a box, and starts biting if you reach for him. It’s fun. The only way to catch him is to bring out food, which only reinforces the behavior. So I end up throwing a small handful of dry food into the spare bedroom, and closing the door as he runs in after it. I’ll go back to bed, but now the rest of them are all riled up. Nevertheless, I crawl into bed and cover my head with a pillow, hoping for the best. 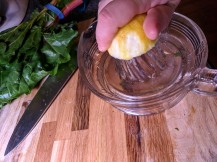 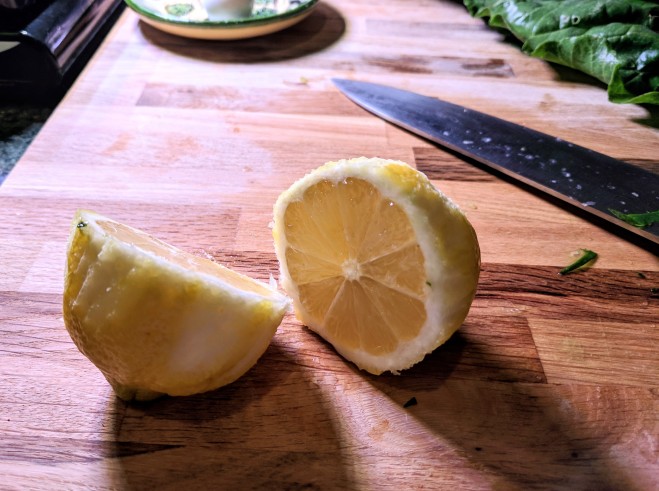 THEN. Motherfucking Harriet will start nibbling on the large Ikea plant in the living room. I don’t know why we even purchased the fucking thing. It didn’t work last time, and it’s not going to work this time. We are cat people, not plant people. Despite all of our efforts, Harriet fucking eats the leaves every godforsaken morning. And then she proceeds to barf them up on the one nice rug we have, not the wood floors. EVERY. FUCKING. MORNING. And if that isn’t enough, Cecil will attack her right after the barfing incident (which I have taken to ignoring), which causes screams so loud I have to believe the neighbors think we’re running some sort of weird cat fighting ring at 4:30am everyday. I end up having to put her in the bedroom with Bourdain to both protect the plants and for her own safety (we can’t trust Cecil when he’s hungry). Once she is contained, it gets better. But we still have to deal with Cecil jumping on us. In fact, he’ll often sit next to my head and just stare down at my face until I wake up. It’s creepy as fuck. The only quiet, well behaved one is Chuck. He’s such a good, fluffy boy.

Oh wait, that’s not accurate at all. Once the others stop with their shenanigans, Chuck will start yowling uncontrollably in the living room. We have a loft, so the master bedroom opens into the living room, which means he’s yowling LOUDLY right fucking next to us. It’s fucking horrific. 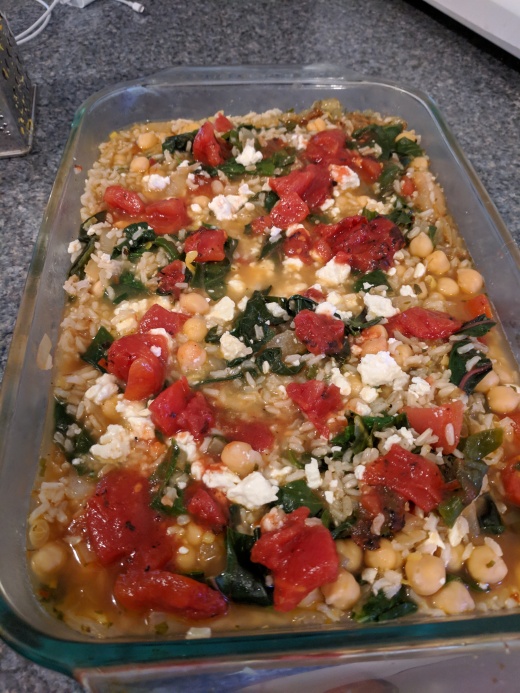 Oh, and BTW, this all repeats itself at dinnertime, too. It literally just happened while I was writing this. It’s just less annoying at 6pm versus 4am. Ya know? 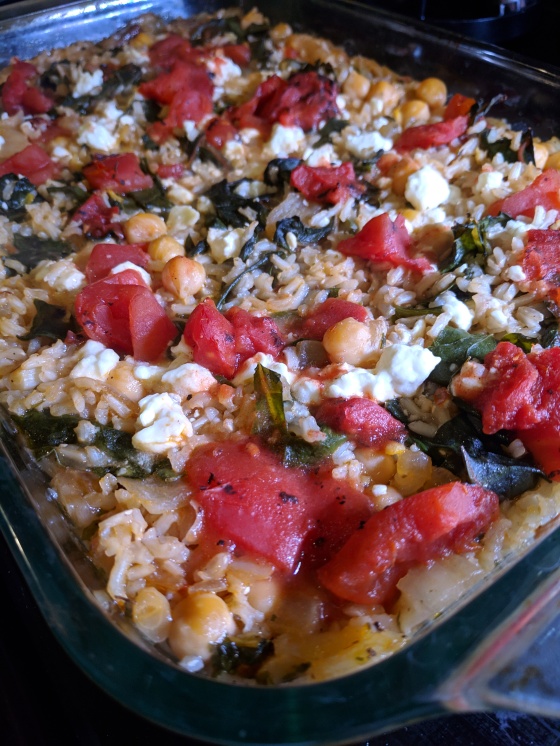 Last weekend T and I decided to explore the neighborhood by bar hopping. I had my very first grape ape, and still made us a wholesome dinner. These were things I had on hand, so there was no shopping needed. It was quick and easy, and tasted great with an egg on it for breakfast, too.

Zest and juice of one lemon

Preheat oven to 350 degrees. In a large sauce pan, boil water. Once boiling, add in dry brown rice and simmer for 17 minutes. Drain and rinse. Set aside. Saute the greens with a little olive oil in a skillet over medium high heat. Once wilted, set aside. In a large skillet over medium high heat saute onion in olive oil until translucent (5ish minutes). Add in the minced garlic, red pepper flakes, oregano, salt and pepper. Cook for 2-3 minutes before adding in the rice. Mix well and let cook for another 2-3 minutes. Pour in broth, lemon zest and juice, and chickpeas. Sprinkle with salt and pepper. Stir everything together well. Add in half of the feta and the cooked greens. Pour entire mixture into a large baking dish (9 x 13). Sprinkle with remaining feta and parsley. Bake for 20-25 minutes, then broil for 5 minutes.