Ya’ll know how I feel about fall, right? It’s not my jam. I just don’t give a fuck about the leaves. They end up all over the streets and sidewalks, which means I step on them, and little bits inevitably get stuck in my legwarmers. I know what you’re thinking… But, Kelsey, the colorful leaves are just so pretty. Ugh. (Insert eye-roll emoji) I really couldn’t care less.

I do, however, love love love butternut squash. I discovered it only a few years ago while making simple vegan soup, as well as some bomb ass mac and cheese. This was not a food I grew up with, as the number of veggies my mom likes could probably be counted on one hand. The one time I had any type of squash was at my high school best friend’s house, and it was covered in cinnamon, and around Thanksgiving. While I liked it in the moment, I don’t love when squash is made to be very sweet (which is also why I generally don’t like sweet potatoes, because I always think they’re going to taste like regular potatoes, and then I feel like I’ve been fucking lied to). It feels like they should all be savory, so I’m completely thrown off when they’re sweet. 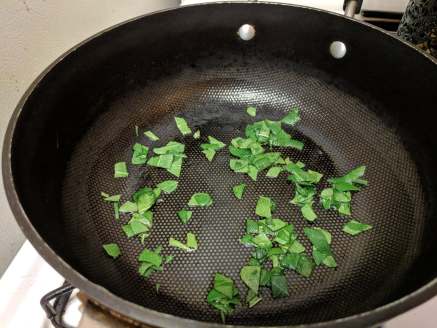 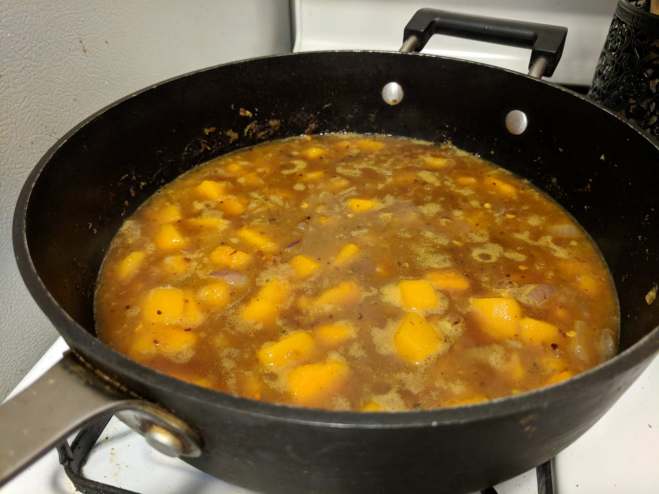 Last week was Thanksgiving, which, as a foodie, is my fucking jam. I love the start of the holiday season so much. Especially because it also signifies the end of autumn, so everyone can just shut up already. T thought it’d be fun to have all 4 of our cats under one roof for the holiday weekend. He suggested it several weeks ago, but claimed ignorance when I reminded him last Sunday, full on acting like I was a goddamn nutcase for suggesting such a thing. To which I responded with, “Not my problem, man. We’re doing this. It’s already decided.” He may or may not have had a few drinks when initially thinking it was a good idea, but that’s not my fault. So we did it. I lugged over my 2 cats, along with all their shit, and all the ingredients for the full spread of food I insisted on making for Thanksgiving despite the fact that it was only the 6 of us (and 4 of us were felines). I absolutely could not be talked out of making every single side dish. I even made pumpkin shaped (sort of) dinner rolls from scratch, which was enough of a project on it’s own. Since I’m terrible at reading the recipe all the way through before starting, I accidentally ended up with 30 motherfucking dinner rolls. THIRTY. Let me remind you that there were a mere two humans to feed, and we had a full menu of vegan turkey (the only thing I didn’t make myself, and by far the least delicious thing on the table), mashed potatoes and gravy, stuffing, green bean casserole, and some fucking homemade apple pie in addition to those dinner rolls (for pictures of the end product, check out my instagram – @kelseyskitchen23). We also had 3 cats and one monster of a kitten to work around in all of this (Let’s be real, Bourdain had to be put away for most of the cooking, otherwise he’d have sneaked off with all the butter).

I had no real plan or order to things when I started cooking, and I was doing it all in T’s tiny ass box of a kitchen with no windows. This also meant that I had to bring over every single ingredient, since, of course, he doesn’t have and fucking standard pantry staples outside of salt and pepper. He also had 1/3 of a bag of flour, which we had to use for the dinner rolls, gravy, and pie. We used all but maybe 3 tablespoons of that bag of flour, and I am simple NOT okay with cutting it that fucking close. When it got to be time to mix the pie filling together, I realized I had forgotten the cinnamon and nutmeg at my place. This led to a full-on melt down fueled by the fact that I was starving and hadn’t had any wine yet. I mean, what kind of fucking holiday was this? I fell into T’s arms on the couch, crying and yelling about his lack of kitchen supplies, as he reassured me that it was going to be okay. He said that we didn’t have to make pie. This sent me into a full on feeling of pure rage. Of course we’re going to make the pie – I already have a dozen apples in the fridge! And the pie crust was made last night! What the fuck am I supposed to do with it if we’re not making pie today?! WHO DOESN’T HAVE CINNAMON IN THEIR HOUSE?

We drove back to my place to get the spices. When we got back to his place, I downed a glass (or two) of wine, and immediately felt better. We got that fucking pie into the oven, and I went to work on the side dishes.

Of course, then the pie filling dripped onto the bottom of the oven, which subsequently started billowing out smoke. I turned off the oven, and T held a giant fan above his head to blow the smoke away from the smoke detector. He had to hold it there for a long time (it wasn’t light) to clear out all the smoke.

I poured myself another glass of wine. 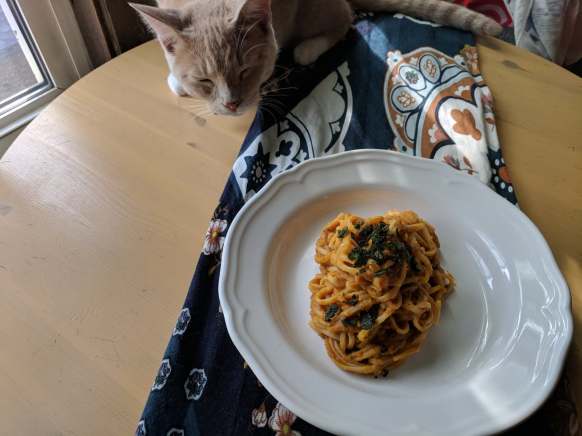 I think even Bourdain was okay with the lack of butter.

This recipe is creamy and decadent without an ounce of cream or butter. I know – it blew my mind, too. When it’s the star of the recipe, I don’t often know how to handle a squash’s sweetness. This recipe goes full-on savory with onions and garlic. It really would have been at home on the Thanskgiving table last week, but I was too proud to cook something “simple.” Don’t be like me. Make this your next holiday tradition.

Anyone else have a frustrating (or fun) Thanksgiving cooking story? Leave a note in the comments. 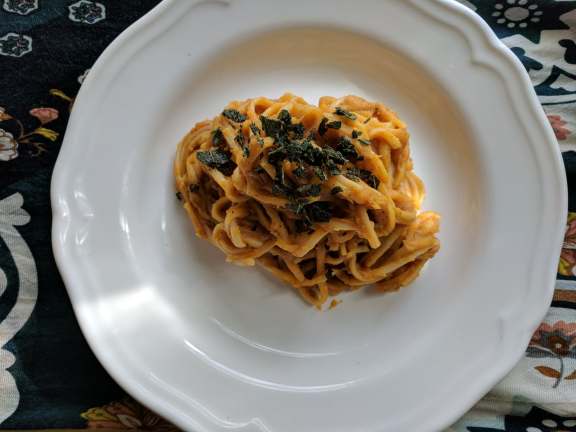 A handful of chopped fresh sage

12oz linguine (or long pasta of your choice)

Place a large pot of salted water over high heat in preparation for the pasta. In a separate large pot, drizzle some olive oil and place over medium-high heat. Sprinkle in the sage and let it fry to a crisp, stirring a couple of times. Once it’s crispy, transfer to a paper towel and sprinkle with salt. Set aside. Using the same pot, drizzle a touch more olive oil, and throw in the squash and onion. Let it cook for 5-7 minutes, stirring occasionally. Toss in the garlic and let it cook for another few minutes. Add the broth and bring to a simmer. Let simmer for about 15-20 minutes, or until it has reduced by about half. The squash should be soft at this point.

While the squash mixture is cooking, boil the pasta until al dente (following instructions on package, or be fancy as fuck with some fresh pasta). Reserve 1 cup of the pasta liquid (don’t forget like I did!).

Take the squash mixture, and blend it in a blender or food processor until smooth. Add salt and pepper to taste (be generous!). You may have to do this in batches. In a large skillet, place pasta + sauce over medium heat. Drizzle in some of the pasta water and toss until the pasta is evenly coated with sauce. Keep adding pasta water to thin it out. Mine still ended up being super thick, but that’s okay. Try not to judge yourself.

*Pro tip: Roast those squash seeds with some olive oil, salt and pepper. Then throw those little fuckers on top of the pasta for some added crunch! (Follow my recipe for pumpkin seeds)