I ordered one of those Hello Fresh meal/recipe deliveries because my friend got me a coupon for a free week trial. I was just in it for the free food, but it was actually pretty cool. And it was nice to have something fairly easy/fool-proof to cook on election night, when my anxiety was peaking, and I was unable to concentrate.

The service sends out these 3 neat little boxes with all the ingredients I need for a recipe (also provided) tucked inside. Everything is measured out for me, and the recipe lists every step with a photo. Idiot-proof. What should have also been included, since it was election week (and they fucking knew it), was a bottle (gallon) of fucking wine. I had to provide that for myself. What a bunch of bullshit.

I recognize this is a food blog, so I should keep things light.

While I realize that things are not quite as dire as they seem, I am deeply disturbed by the election results (as many of us are). I have seen people feel frustrated or angry or disappointed after elections before… that’s normal. What I’ve never seen before is the overwhelming fear, and the sense of mourning. I’ve never been afraid before, and I’ve never seen people so scared of their new leader. I know this happens, but I’ve never lived it. And I recognize how ignorant that is. I’m realizing that I still have a lot to learn, especially considering that I live in an isolated liberal bubble called the Twin Cities. This was a wake-up call for sure. I never thought Trump stood a chance in hell… that the whole thing was a cruel joke. My blissful ignorance lead to a very rude awakening last night, and now I’m left raw and terrified.

When it comes down to it, I know Trump cannot just walk into the White House and make sweeping changes overnight. It doesn’t work like that. And that’s not the thing that scares me the most (though I do worry). He is hateful toward many groups of people, all of whom have very real emotions surrounding this election, and all of whom I am genuinely scared for. But I can only speak for myself, and my personal fears in regards to Trump. The one thing I just can’t seem to wrap my head around, of all the things we know about him (all of the horrible, disgusting things), is the fact that he is accused of sexual assault.

We have elected a rapist as President of the United States.

Are Americans really so uncomfortable with the idea of a woman in office that we have elected a man that is not only accused of sexual assault, but who openly brags about it? What does that say about us?

A challenge to Trump supporters:

I am a sexual assault survivor (and I’m sick of the stigma that goes with that, so I’m posting in on a fucking blog). I challenge you to listen to my story, look me in the eye, and tell me again why you think Trump will be a good president.

And, no, I don’t want you to imagine it happening to your mom, sister, daughter, wife, etc. Our identities as women are not dependent upon those relationships (and not all sexual assault survivors are women). We are humans. We exist, therefore we matter. I am a sexual assault survivor, and I am one of millions. And we all matter. You just elected our abuser as president.

The one silver lining to this shitshow of an election is the fact that people are riled up. We want change, and we won’t go down without a fight. I urge those of you feeling lost and scared to reach out to your friends, family, and community. Rise up. We will not be silent. Band together and work toward change. Find a cause that speaks to you, and support it in any way possible – volunteer, donate, make phone calls, sign petitions, write letters/emails to state representatives. Make your voice heard. All is not lost. We have each other.

And we’re going to be okay.

If anyone gives a shit about this recipe from Hello Fresh, here you go…

Oh, and the photos look like shit because I just don’t care this week. 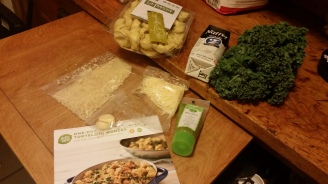 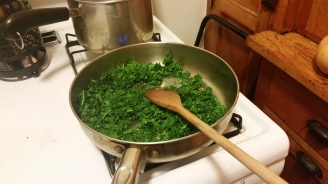 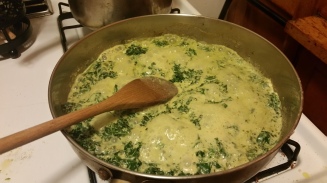 4 oz kale (or just a bunch), washed and de-stemmed

All the wine in the house (not for the recipe, but to drown one’s sorrows)

Preheat oven to broil. Take a drink of wine. Thinly slice kale (or chop manically into little pieces), and mince garlic. Take a drink of wine. Grab an oven proof pan (or a regular one, but then transfer tortellini to a baking dish when it’s time to broil) and heat a drizzle of olive oil over medium heat. Add the garlic and let cook for about a minute before adding the kale, along with a splash of water. Drink more wine. Season with salt and pepper and stir for 3-4 minutes, until softened. Add the milk, veggie stock, a splash of water, and pesto. Stir well to combine, and add the tortellini. Cook, stirring often, until sauce thickens. While this is cooking take a drink of wine, and mix the breadcrumbs and parmesan in a small bowl along with salt and pepper, and a drizzle of olive oil. Once the pasta is cooked, sprinkle with the breadcrumbs mixture and broil until browned on top.

Maybe eat it. Maybe just drink more wine and pass out. I won’t judge you.

**If anyone is feeling depressed/anxious/suicidal or like they might self harm, please call the National Suicide Prevention Lifeline at 1‑800‑273‑TALK (8255). They are available for anyone in emotional distress. Never hesitate to ask for help. I know this is a scary time, but we will get through it.