You ever drink so much that you end up knee deep in mud?

No? Just me? Fantastic.

Apparently you’re supposed to pay attention to where you’re walking in the woods when coming upon a river. I mean, I thought I was paying attention. Clearly, that was false. My boss had to pull me out of the mud, breaking my flip flop in the process. Since those were the only shoes I brought with me for the weekend trip, I had to wear his shoes home.

I’m not good with moderation (or boundaries). I am, however, working on it.

Most companies host a tasteful party once a year, and maybe throw in a few team building exercises. At my work, we like to get hammered and wander through the woods together. It’s how we bond.

I was actually planning on not drinking much this year. But then I showed up to my boss’s house and immediately starting downing pineapple mojitos (thanks, Stacy!). Before I knew what was happening, I was sinking into mud, running around in the river, trying bear meat for the first time, voicing any little thought that crossed my mind, and being an all-around obnoxious drunk person. Suddenly it was early morning, and I was waking up to the sound of dogs walking around, the taste of death on my tongue, and a feeling of regret in the pit of my stomach. #storyofmylife 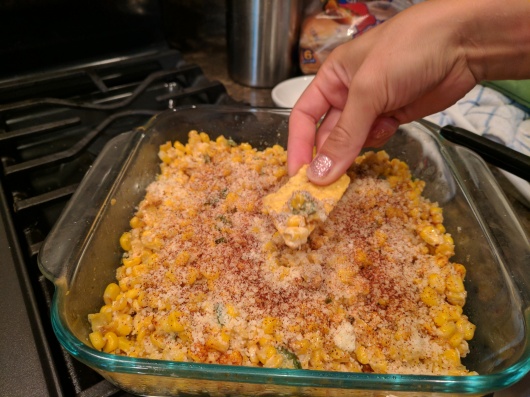 But I did make this fucking scrumptious Mexican corn dip to share. I discovered the stuff at a dog’s birthday party the week before. Yes, a dog’s birthday party. He was turning 15 and spent the afternoon getting table scraps and eating ice cream straight out of the container (sounds like every single night I’ve spent white girl wasted). There were cupcakes with frosted swirls of poop on them. It was amazing. I got a little drunk there as well, and went to town on this corn dip that someone brought, after yelling at him for topping it with cilantro (I mean, how dare he? Didn’t he know I was the only one that mattered at this party?). Drunk Kelsey can be kind of a bitch.

After berating him for using cilantro, I also chimed in with, “Have you ever had Mexican style corn with the mayo and cheese? You know, they sell it on the street sometimes? This tastes just like that!” as if this was a revolutionary idea he couldn’t possibly understand. He responded with, “Yeah, that was the idea,” and proceeded to graciously give me the recipe. (He was actually really nice and patient with me.)

OMG, is this what it feels like to mansplain something? I’ve never been on the other end of it before.

2 tablespoons shredded parmesan, plus extra to sprinkle on top

Drizzle some olive oil into a skillet and put it at medium-high heat. Throw in the corn and jalapenos. Cook for 8-10 minutes, stirring occasionally, until cooked threw and slightly browned. Pour the corn/jalapeno mixture into a mixing bowl with all the other ingredients. Scoop into a shallow serving dish and top with a little extra parmesan and chili powder. Serve with tortilla chips.

If you made it ahead of time and are just pulling it out of the fridge, bake it at 350 degree for 20 minutes, then top with cheese and chili powder before serving.

Side note: These pictures are shitty because I was drunk. *insert shrugging emoji*