Ok, so I recognize that this isn’t the most original post. I mean, everyone and their fucking moms are making butternut squash mac and cheese right now. It’s fucking fall, and there are squashes everywhere. I was actually planning on scrapping this whole idea, and just making something else to blog about. But then something happened that surprised me.

It ended up being the best thing I’ve ever made. 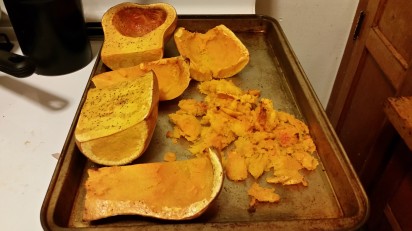 Other than cake (obviously).

I mean, who knew?! I guess I can add this recipe to the short list of things I enjoy about fall (along with PSLs, chunky scarves, boots, and more PSLs).

My one complaint would be the roasting situation. I’m still not getting this shit down. So, the recipe says to roast the squash for 25 minutes at 400 degrees. I did that, and found it still almost raw in the middle. It was impossible to scoop without using all my muscles. So after the 25 minutes, I 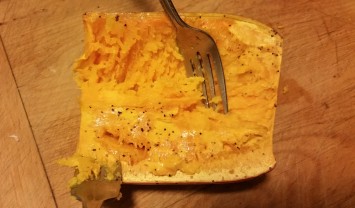 scooped as much as possible, then threw all those bits back into the oven with the rest of the squash, and roasted for another 30 minutes or so. I think next time, I’ll just peel the whole thing and chop it up before roasting. It was super frustrating to have to wait that long, especially since I made this at like 10pm, while starving. I kept eating chips and salsa while I waited, which cut down on how much mac and cheese I was able to stuff in my face later.

Side note: This recipe makes a shit ton of food. I suggest cutting it in half if you don’t live with 6 children, or a small army. 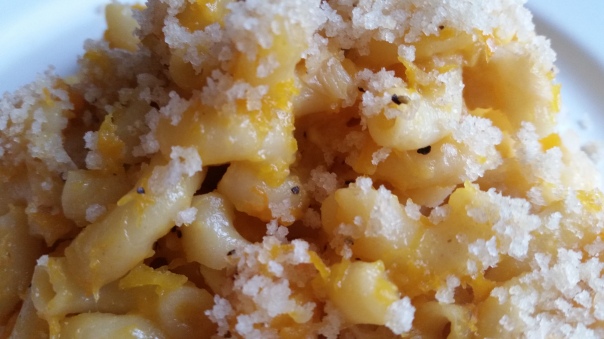 1 pound macaroni (I just realized while writing this that she only asks for 12 oz… but I used a full pound and it was great. Do what you want.) 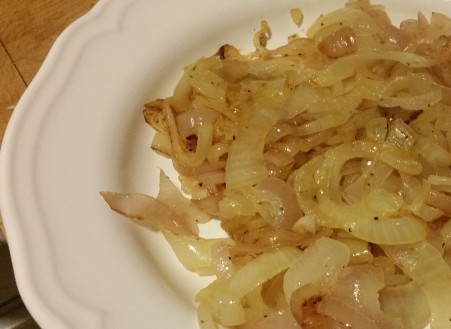 8 tablespoons butter (that’s a whole stick, for those that aren’t good with math)

Start with boiling your pasta until al dente. Drain, and rinse with cold water. Set aside.

So, there are 2 options for roasting the squash. Either way, preheat your oven to 400 degrees. Then, you can either: 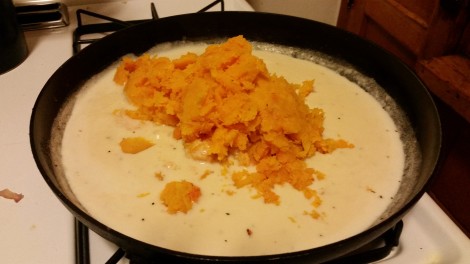 While your squash is roasting, melt 2 tablespoons of butter in a skillet, and cook onions over low/medium heat. It takes about 20 minutes to get them just right, which at first I thought was ridiculous, but turned out to be amazing. Just keep stirring them every few minutes, until they are golden brown. You won’t be sorry. Once they are finished, set them aside in a medium bowl.

Once you’ve used your preferred method of roasting, place half the roasted squash (assuming you roasted the whole thing, which is what I did) into a bowl, and mash with a potato masher. Set aside.

In the same skillet that you used for the onions, melt 4 tablespoons of butter over low heat. Sprinkle in the flour, and whisk for 1-2 minutes, until it forms a thin paste. Whisk in the milk. Cook for a few minutes, while whisking, and add lots of salt and pepper. Taste as you go! You’ll need a lot of salt.

Stir in the mashed squash, until fully incorporated. Add cheese, and keep stirring. Once everything has melted together, taste it again, and adjust salt and pepper as needed. Then mix in the onions and pasta. Pour everything into a 9×13 baking dish.

Melt the last 2 tablespoons of butter in another skillet, and add breadcrumbs. Stir until combined, and sprinkle over the pasta. Bake at 400 degrees for 15 minutes, or until the breadcrumbs are golden brown.

One thought on “Butternut Squash Mac and Cheese”