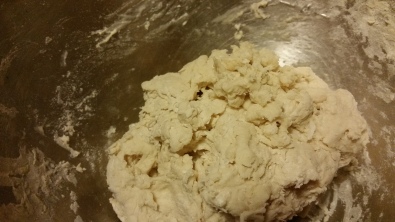 I know – it’s your favorite holiday, isn’t it? It’s everyone else’s fucking favorite holiday. I don’t get it. I never know what my costume should be, and even when I do figure something out, I never have anywhere to go. Maybe this stems from being a nerdy kid, or from not having many friends in college, or from being an introvert. I’ve just never felt cool enough to participate in Halloween. So I became a little bitter. I’m entitled to my feelings. Fuck off.

That being said, I do have a costume this year. I’m going as a mermaid, because mermaids are fucking awesome and magical. I’m really half-assing it, though. I got some leggings with a mermaid tail/scale pattern, which I’ll pair with a purple tank top and a shit ton of glitter. Good enough, right?

In the three years I lived in New York, I don’t think I was invited out even once for Halloween. One time, some of my girlfriends told me they weren’t doing anything, but then I saw pictures of them with matching costumes at some party on Facebook. It was like something out of a

shitty teen movie, except I was 24. I’m not friends with those girls anymore (obviously), though I probably never really was. New York is full of mean girls.

Most Halloweens are spent eating all the candy I bought just in case we have trick-or-treaters at the apartment (which has never happened). I also like to watch the classics – Hocus Pocus and Halloweentown (duh). I cannot watch real scary movies. I’m a total wuss.

Back when I liked Halloween, I would dress as a fairy and get white girl wasted every year.

When I’m white girl wasted, I like to eat pizza.

That transition was fucking epic.

The beauty of this recipe is it’s flexibility. I never remember to make pizza dough a full 24 hours in advance. I mean, who plans that well?! This recipe has options for 22, 12, or 6 hour rise times. I usually do 12 hours, since I’m already thinking about dinner at breakfast. That’s normal, right? This recipe is also super easy. Don’t be intimidated by making dough from scratch. It’s surprisingly simple, and crazy cheap. Also, no kneading required. 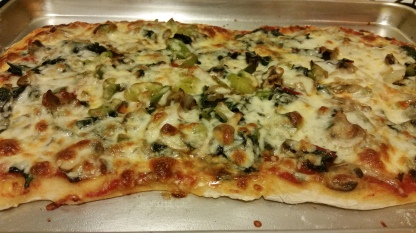 Mix dry ingredients in a medium mixing bowl. Add water slowly, while stirring. It will come together and be sort of scraggly looking. That just means you did it right. Mush it all together in the middle, and loosely cover. Store at room temperature for the corresponding amount of time. Once dough has risen to about double it’s original size, sprinkle it with flour, and dump it onto a floured surface. It should be soft and stretchy. Cut into half, and roll both halves into a ball. Pick up one half with floured hands, and let it stretch and fall away from you, back to the counter. Repeat on all sides, making kind of a messy rectangle. Then place on a greased and floured cookie sheet. Use floured fingers to press and pull the dough into a rectangle. It should fill up most of the surface of a standard cookie sheet. Repeat with other half of dough (or half the recipe and only make one!).

Preheat oven to 500 degrees while preparing your toppings.

A shit ton of mushrooms

Whatever you choose to add, make sure to saute it with olive oil and salt and pepper for a few minutes first. It makes a big flavor difference.

Add your sauce, then veggies/meats, and finally cheese. Bake for 10-15 minutes, rotating once.

Eat it cold, right out of the fridge, after a night of heavy drinking.

One thought on “Halloween and Homemade Pizza”