I’m having some body image issues, which I attribute to my strained relationship with yoga. Yoga is something that has played a huge roll in my life over the last 2 years. I started going to ease my anxiety. I continued going because I started following people like @nolatrees and @mynameisjessamyn on Instagram, and they taught me that my body wasn’t in the way of advancing my practice (their bodies looked like mine, but they were doing handstands and headstands without a problem). See, I went into yoga thinking I could only do some of the poses because I’m chubby… and chubby people can’t do yoga… right? Wrong. Fuck that shit. The more I advanced my practice, the more I realized that my body was never in my way. Of anything. Ever. It was all mental. So yoga taught me a beautiful lesson… my body is just as capable as a thin person’s body. It taught me to love my body just as it is, without worrying about how I look to other people. And that carried over into my everyday life. I was completely smitten with yoga for a long time. But lately, that love affair has faded. I started looking at it only as a workout, and not as an activity that brought me joy. I was just going through the motions… forcing myself to go to classes because I needed to get my workout in. That shouldn’t be the reason I step into a yoga studio. It can definitely be one of the many benefits of going, but can’t be my sole reason. So I have taken a break from my practice. I’ve been mostly going for walks instead. Being outside during these last few weeks of warmer weather feels true to me right now. Plus, I get to spend hours on the phone with Cortney, which is always a treat.

I also tried rock climbing for the first time last week. It was SO much harder than I thought it would be! Seriously. Have any of y’all tried it? I couldn’t get more than one full step up on any of the easiest walls for adults. I finally saw a corner full of small children, and made a beeline for one of those courses. It was still HARD AS FUCK. But I got almost halfway up a wall. The friend I was with was so sweet. She said, “It was totally halfway up the wall! I mean, if you’re measuring from your top hand when it’s reaching.” Point is, I tried something new and that is badass. I’m not embarrassed, and I’m definitely going to try again.

Since stopping my yoga practice (temporarily, as I’m sure my love for it will return), I haven’t been as active as I normally like to be. I’ve been lounging and watching a lot of movies/TV shows on Netflix (OMG have y’all seen The Good Place? I’m obsessed!) while cooking delicious food. Honestly, the break feels nourishing. However, it also makes me very aware of my body and the space it takes up. I suddenly feel less worthy because I’m not active. Like, it was okay for me to be a chubby yogi, but just being a chubby woman isn’t good enough. I’m suddenly more concerned with taking up too much space again. It makes me uneasy and insecure, which is something I fought so hard against. I’m working on it, but it’s a process.

By not rushing off to a yoga class every day, I am allowing myself more time to explore other things I love. I’ve been cooking a lot lately, and it feels good to be in the kitchen again. Plus, this means less time wearing pants and less laundry! Fuck yeah!

It’s fall in Minnesota, which means I can finally turn the oven on again. Roasted chickpeas are one of my favorite ways to add protein to a dish. You can season them with whatever you want, and they add such a delightful little crunch to everything. Plus, I feel good about eating them. It makes me happy when I find foods that are both healthy and delicious. One of the things I miss now that I’m a vegetarian is sandwiches. I especially used to love getting chicken gyros from street vendors in NYC. Is this the same? Fuck no. But it is definitely reminiscent, and it satisfies the craving. It is also just delicious in it’s own right. Plus, it’s easy as fuck to throw together, and there’s a bonus burst of heat in your apartment when you have to turn the oven on. 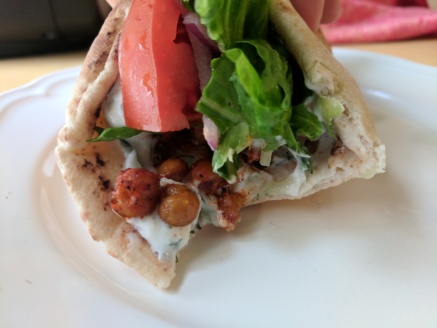 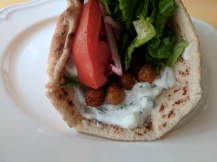 Greens of choice (arugula is good)

For the tzatziki sauce:

Salt and pepper (to taste)

Lay the shredded cucumber out on a towel/paper towel with a sprinkle of salt. This will draw out some of the moisture. Let it sit for a few minutes, then mix all that shit in a bowl. Taste it before adding it to the gyros. Adjust seasonings as needed. I don’t like mine super garlic-y. The original recipe called for actual cloves of garlic, which seemed aggressive. If all I can taste is garlic then what is the fucking point? When adding the garlic powder, just do a sprinkle at a time, and taste it before adding any more. If you overdo it, just add some more yogurt and calm the fuck down. It’s going to be okay.

Preheat oven to 425 degrees. Pat the chickpeas dry with a towel before tossing with a heavy drizzle of olive oil (don’t be cheap) on a large baking sheet. Roast for 20-25 minutes, stirring them around halfway through baking time. Once finished (they should be slightly browned and crispy), drain on paper towels. At this point, toss with some salt, pepper, paprika, and cayenne to taste (taste as you go!).

Warm up the flatbread for a few minutes in the oven while the chickpeas are finishing (I wrapped mine in tin foil), or just microwave them for a few seconds each. Spread a layer of the sauce onto the flatbread, followed by a handful of chickpeas, some onions, tomatoes, and lettuce/greens.

Take the time for some self care, and try not to feel guilty about it (it’s harder than you think).

I made focaccia! And you can too! It's surprisingly easy, with very few ingredients. Link in bio for blog. Share with friends! . . . #foodblogfeed #foodbloggers #foodbloggersofinstagram #foodbloggerlife #whatfoodbloggerseat #nomnomnom #delicious #eatmebakery #yummy #rosemaryfocacciabread
I just want to eat fancy ass breakfast every day. Who's with me? . . . #tinyasskitchen #breakfast #eggs #overeasy #microgreens #farmersmarket #eatlocal #breakfastisthebest #foodblogfeed #foodbloggersofinstagram
Another variation of the veggie egg scramble from my last blog post. This one has green beans, green onion, mushrooms, kale, and sausage. It was the last of all those veggies in the fridge, so now I'm going shopping. How do you like to scramble your eggs? . . . #tinyasskitchen #eggs #scramble #veggies #eatyourveggies #eater #eatermpls #nomnomnom #sourdough #butter #cookingwithoutpants #cooking #breakfast #saturdayvibes
This looks like a plate of garbage, I know. But trust me, it's fucking awesome and super simple. It can be made on a lazy Sunday, or a hectic Monday. And it can be made with any veggies you have on hand, which means there are no excuses to skip breakfast. So get cookin'! #ontheblognow . . . #linkinbio #minneapolisbloggers #minneapoliseats #twincitieseats #eeeeeats #eggs #breakfast #scramble #veggies #vegetarian #glutenfree #broccoli #mushrooms #spinach #foodblogfeed #minneapolisfoodblogger
This is my face when digging into a surprisingly delicious veggie kabob. I had the pleasure of trying several vegetarian options at @blacksheeppizza for this photoshoot, and it was all incredible! What will you be eating this weekend? . . . #blacksheep #pizza #mplseats #vegetarian #eatyourveggies #eatmebakery #veggiekabobs #apps #fingerfood #eatdrinkdishmpls
It's finally here! New blog post that'll show you how to make the easiest and most impressive dinner: Mushroom Galette with ALL THE CHEESE. It was honestly a fucking breeze to make, and I encourage you all to go make one right now. Link in bio. . . . #tinyasskitchen #minneapolisbloggers #mushroomgalette #mushrooms #brusselsprouts #onions #herbs #simple #easyandfancy #galette #getinmybelly #putaneggonit #brunch #vegetarian #delicious #minneapoliseats