As previously mentioned, my love language is “acts of service,” which is primarily demonstrated through cooking and baking. Since the guy was visiting from Hawaii last week, and I had missed his birthday by a few weeks, I made him this birthday cheesecake (which is better than a boring normal birthday cake). He mentioned in passing once that he loves cheesecake. I pay attention to these things. He also mentioned that he doesn’t like cream cheese, which obviously doesn’t make any fucking sense. Honestly, it was almost a deal breaker, but I was able to move past it. I’m mature like that.

The cleaning frenzy was out of control to prepare for his visit. I bleached my bathtub for God’s sake. WHO AM I? I just kept hearing my friend, Liz, teasing me for the mold and soap scum during her last visit. To drive her point home, she drew a heart in the soap scum with her finger, which was both cute and disgusting.

Y’all. This visit was incredible. We saw so many things, and had so many conversations and experiences. He tried AcroYoga for the first time. He attended a Yin class that I taught. We drove to Duluth and walked along the shore of Lake Superior (where he picked up trash and I swooned). We went to the science museum and the sculpture garden. I cooked dinner while he made cocktails. We went to fancy ass restaurants. We ate the most marvelous food together, including peanut butter stuffed jalapenos (The Butcher and the Boar) and a hamburger that was sauteed in duck fat (New Scenic Cafe). I ate meat despite my vegetarianism (FML, that shit was good). I don’t know why he has that effect on me. I just so rarely have dinner with someone else that loves food as much as I do. It makes me want to try everything being served.

Despite all the fun things we did together, my favorite part of the whole trip was simply walking around the city. We sat together. We people-watched. We talked. We held hands. We watched the sun set. I was basically living inside a movie. Obviously.

At the end of the visit, I cried a bunch at the airport. Like, a bunch. It was messy and embarrassing, as most human experiences are (at least the ones worth having). When I apologized for crying and “being weird,” he simply said, “Don’t apologize. You’re open and honest. I appreciate that about you.” I’m sorry… what? Who the fuck is this guy? What the fuck is happening? Am I being punked?! (Does that reference make me sound old?)

There’s still a 4,000 mile barrier and a lot of uncertainty. I get that. But, fuck it. I’m holding on as long as I can, while remaining open and honest. Isn’t that what life is all about? Staying open to the experience? #noregrets

Anyway! There are several steps in this recipe. I sort of enjoy the fact that it looks really complex (and comes across fancy as fuck). While it can be a bit time consuming, it’s actually fairly simple. Don’t let all the steps scare you! Go make this for someone you care about, or just for yourself. I have a friend that likes to eat this cheesecake in the bathtub while listening to Tom Waits. My guy ate it for breakfast in his underwear (which is the biggest baking compliment I’ve ever received – also, y’all know how much I love eating sweets in my underwear). This is a judgement-free zone. You do you.

The trick to making this pretty is not skipping the ganache layer. Ganache provides it with a smooth, luxurious finish. Otherwise it can look sloppy as fuck. Don’t be a sloppy fuck. Plus, why would anyone even consider skipping an extra chocolate layer? It’s absurd. 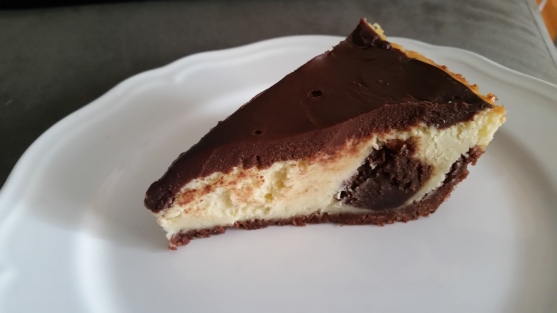 For the brownies: Follow the instructions here. Set in fridge until cool (I made these the night before). Once cooled, cut into smallish squares (approx. 1″).

Mix all the crust ingredients in a medium bowl. Press into a greased pie pan, getting some up the sides as well. Set in fridge until ready to fill.

2 cups brownie cubes (You will have extra! You’re welcome!)

Preheat oven to 350 degrees. Beat cream cheese in a stand mixer until light and fluffy. On a lower speed, add the eggs one at a time, followed by the vanilla and sugar.  Make sure to scrape the bowl occasionally to get all that good stuff mixed together. Once everything is fully incorporated, fold in the brownie cubes. Pour filling over the crust and bake for 45 minutes. Outer edges will brown slightly. Let cool completely. I usually throw it in the fridge right away, but that’s not what the pros do because it can cause the top to crack. We’re not worried about cracks, though, because we have some motherfuckin’ ganache to cover all of our mistakes. Only cover with ganache once fully cooled. 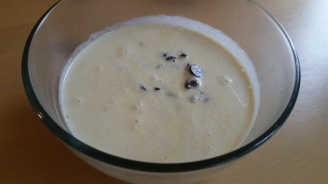 Bring heavy cream to a simmer (basically once the edges start bubbling), and pour over the chocolate chips. Let sit for a minute or two, then whisk together. Pour over the cooled cheesecake and place back in the fridge. Once set, dig in!

Now then, I’m off to finish the last piece of this… while watching Netflix in my underwear. I suggest you do the same.

3 thoughts on “Brownie Cheesecake for a Visitor”