I’m going on vacation today, but my brain has been turned off for at least 2 days. It makes everything more difficult. My patience is wearing thin (and, let’s be real, it’s not great to begin with). I was up late last night frantically packing, because it’s impossible for me to plan ahead. I also insisted upon going to an acro jam, because apparently I wanted to have even less time to pack. And I showed up late to the jam (which, if you don’t know, is just a term for acro people getting together and doing acro for a few hours without a teacher), because I was starving to death. I made mashed potatoes at the last minute, which is silly because it’s not really an on-the-go type of food. 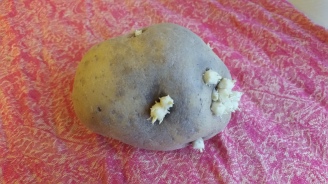 I also ended up going to MOA (for those that aren’t cool and live in MN, that stands for Mall of America) after work last night to return a swimsuit that I purchased online last week. I think I’ve complained about this before, but what is the fucking deal with plus size swimsuits(or is it all of them?)? I ordered one from Torrid with these cute little pink details and a much needed underwire… only to find that it won’t even remotely accommodate my chest. I even tried it on in a bigger size in the store, and technically it fit… but fuuuuck. I was going to have a nip slip for sure, and I don’t need that kind of stress in my life. Fuck that shit. I’m all for a sexy, low-cut look… but I also intend to be swimming and snorkeling. I need to feel secure in my swimsuit. I’m sick of all the stores carrying the some shitty styles in plus size. Like, no, I do NOT want a fucking halter top. Why is this the most common option? Can you even comprehend how heavy my breasts are? That skinny ass fucking strap is cutting into my neck. It’s horrible. And even this one that I purchased last week, which was supposedly made for my body type, is completely impractical. I was literally going to fall out the top of it, and then to make matters worse, there were padded inserts to help push me further out of the top. What. The. Fuck.

Anyway, I did end up finding something I like, but the whole experience was a pain in the ass. I’m just glad it’s not a halter and that it doesn’t have a fucking skirt attached. Stop trying to hide my body. Fuck.

While I’m so excited about all the amazing things I’ll be doing while on this vacation, one of the most exciting parts of it for me is that I will get to turn my brain off for a bit. I’m fucking exhausted. For 2 whole weeks I won’t have to worry about bills, chores, work, or (most importantly) dating. I don’t have to fucking overthink anything, or analyze intentions. I just get to fucking relax and have fun. This trip is so needed right now. And I will get to spend time with a handful of my favorite people, which just makes it even better. Plus, I’ll get to eat mochi every single day in Hawaii.

So these mashed potatoes (is it still plural when it’s just one potato?), like I said, were made on a whim when I was starving last night. I was really craving french fries, but you know, you can’t always have what you want. I’m a big fan of leaving the skin on for mashed potatoes (my mom always says that’s where all the nutrients are), but you’re welcome to peel yours first. I live alone, so I usually only boil and mash one lone potato. It works out really well, because that one potato fluffs up to double it’s size! Try it out. Making mashed potatoes for one doesn’t have to be considered “too much effort.” It’s really easy, actually. Besides, you’re worth the extra effort. 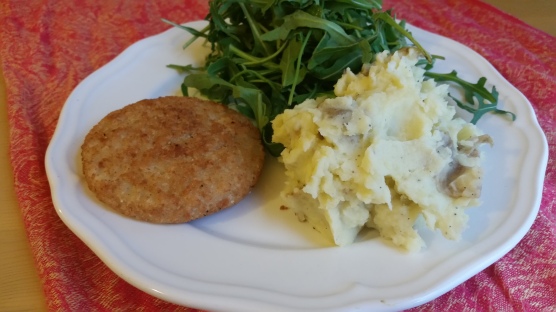 1 large russet potato, unpeeled (but remove all the growths on it, because we all know it’s been sitting in your cabinet for weeks)

Bring a pot of water to boil. You only need enough water to fully cover the potatoes. While waiting for the water to boil, wash your potato and chop up into 1-2″ cubes. Once water starts boiling, throw in the potatoes (Carefully! Splashing boiling water is no joke!). I suppose you could just put the potatoes in before boiling the water, but I like to live on the edge. Let boil for about 10-15 minutes (until soft – you’ll know by stabbing a cube with a fork, lifting it out of the water, and it falls right off). Drain and place back into the same pot. Add butter and start to mash with a potato masher. I like to wait until the butter is mostly melted before adding the half and half. Start with a small splash of half and half and mash a bit more. If it’s still too thick, add some more. Continue adding half and half until it’s the consistency you like, and then add some salt and pepper. Taste as you go. You’ll need more salt than pepper, but pepper can be a nice touch.

You could also top this with some green onion, or add in some cooked mushrooms and garlic. Roasted garlic is always good with mashed potatoes, too. But I kept mine simple last night, mostly for a lack of time. Serve with whatever the fuck you want. I did a fake chicken patty and some arugula, because that’s all I had lying around. I wouldn’t judge you at all for serving it with nothing. Just eat that shit right out of the pan while watching some Netflix if it makes you happy. Fuck going out and socializing.